West Bhutan Tour is different attraction for travelers; manly Bhutan visitors are going to explore the common places where a regular tour generally involves. Bhutan has various wonderful cultural heritages in west part of the countryside. It is also well preserved and rare explored by tourists.  The magnificent places are still exists as different way of tradition and culture where travelers can encounter there real mystics. There tradition seems similar like Tibet but the main stream of religion is the same but tradition and cultural practice follow not as Tibet.  However this unique typical cultural reflection may add best flavor of your tour. Just make sure about your holiday Eco Trek will make your dream come true this exotic holiday.

Day 1: Kathmandu - Paro
The flight into the Bhutan Himalayas is one of the most spectacular experiences you will ever witness. Flying in from the Himalayan country of Nepal towards the North East, one can witness from the left side of the plane, a chain of the world's highest and majestic peaks. Pay careful attention when the  Druk  Air  captain points out the names : Mt. Everest, Kanchenjunga and the rest as you fly pass them in minutes. Soon you will  descend into Druk Yul, and even as the plane lowers it landing gears preparing for landing you will not find any air strip or signs of a city, do not despair, instead enjoy the view of the approaching valley and the primeval alpine forests, the little monasteries, temples and farm houses all in splendid isolation. Moments before landing, you may catch a glimpse of the fertile Paro valley, the colossal Paro Dzong and the winding Paro Chu river. As you step out of the plane, take your first breath of cool, clean fresh air, this will be your first free gift  Bhutan has to offer to the guest. After your Bhutanese guide identifies you, he will escort you to the Olathang Hotel on the hill.

Day 2: Paro Valley
The people of Paro are known for their hard work, which they like to show in their big and traditional country houses. If you marry a girl from Paro, be prepared to put a metal roofing over the traditional shingle roof in your wife's house, to show that you are a capable and well – to – do husband, so we joke among ourselves. Morning sightseeing includes : the Ta Dzong National Museum considered to be one of the best natural history museums in Asia ; it has a fine collection of natural and historic artifacts. A short drive to the Drukgyel Dzong fortress, a strategic sentry where the Bhutanese forces repelled the numerous Tibetan invasions from the north ; the majestic Jumolhari or the 'Mountain of the Goddess' can be seen in the background for many, the 2- 3 hour hike to Taktsang or the famous' Tiger's Nest' is a memorable spiritual journey. It was here that the great tantric master Guru Padmasambhava flew in from Tibet on a tiger to bring Buddhist teachings to Bhutan, retreat in their spiritual quest : the remainder of the day can be spent shopping or simply strolling through town.

Day 3/4: Thimphu : The Capital Of Bhutan
Thimphu is a short hour and half drive from one main valley to the next across paddy fields, apple orchards, farm houses, paddy stacks, farmers drying paddies on the rosd, cattel, pine trees and hamlets that smell of burning wood. Check in at the Jumolhari or Druk Hotels. When in Thimphu be prepared for several things. This unique capital (8000 feet) of the country has adopted its own version of the British – india colonial times traffic policemen, who can startle you and memorize others with his elaborate hand gestures : sometimes he may be signaling stop when it looks like go but don't worry just observe the flow and notice khis smile as you stare at him.

Sightseeing includes the Tashicho Dzong, seat of the royal government and central monastic body, it was rebuilt in the early 1960s after a fire destroyed most of the building; the late King's Memorial Chorten which is well visited by the residents of Thimphu especially during the festive and religious occasions; the Handicrafts Center to view the traditional arts now being revived by the government : the Indigenous Medicine Hospital, where herbal medicine, acupuncture and the ancient art of healing that has  passed down from Tibet is still being practiced today ; if time permits you can also visit the Thankha Painting School ; silver and goldsmith village ; if you visit coincides on a Saturday or a Sunday you witness the interesting 'Sunday Market' so called even on Saturday ! ), you can delve into the various vegetables, chilies, temperature fruits from all parts of Bhutan, ( all grown without the use of pesticides and chemical fertilizers ) ; not far from the market place is the Changlimithang ground where you will always find the game of archery ( the national sport of Bhutan ) being played.

Day 5: Thimphu To Gangtey Via Punakha & Wangiphodrang  ( 6 Hrs Drive)
After breakfast, drive east climbing steadily towards the Dochu La Pass at 10000 feet. A large chorten and forest of prayer flags greet you as you face the range of majestic peaks towards the North, Gangar Punsum , among others is the highest unclimbed peak (over 24000 feet ) in the world. The descent from the pass to valley is about 2 hours, with a altitude  drop of over  5500 feet you pass through temperate forest colored with rhododendrons and magnolias, down to the semitropical zone of orange, banana and cactuses. Situated near the river on a small plateau is the famous Chime Lhakhang for infertile women.

The Punakha Dzong built in the 16th century by Shabdrung Ngawang Namgyal, was the winter capital for 300 years; today it is winter home to the Je Khenpo the chief Abbot, hundreds of monks, and also serves as the asministrative headquaters for the Punakhadistrict. Downstream from the Punakha valley is the Wangdiphodrang Dzong strategically located on a ridge (4430 feet) over looking the junction of the Sunkoshi Tangchu rivers; it is  the gateway to central and eastern Bhutan. Legend has it that Mahakala, the protective deity of Bhutan appeared to tell Shabdrung of a prediction, saying; 'at top of a rocky spur where two rivers meet, at the place where a flock of raven will fly off in four directions, you will build the dzong.' As prophesied by the deity the Shabdrung built the dzong in 1638. The Punakha and Wangdi valleys are also the winter home for many of the high altitude farmers who migrate with their cattle to the warm climate in the valley.

After lunch, about 3 hours drive to one of the most beautiful open valleys in Bhutan, Gantey is winter home to the rare and endangered black necked cranes (grus nigricllis) which migrate to Bhutan around mid November from Tibet and central and eastern, Sikang, Yunnan and Tonkin in China. Cranes have for centuries  captured the human imagination with their intelligence, poise, sociality, beauty and freedom, which have given rise to several myths, legends, folktales and songs. The Bhutanese have their songs of the crane popular among village floks. This year (1994) about 185 birds have arrived from Tibet to feed in their traditional habitats in Gantey. By mid February, the cranes fly back across the Himalayas to their summer home  towards Tibet and China. The small village is dominated by the yellow roofed Gangtey  Monastery, said to be the only Nyingmapa monastery in Bhutan headed by the Gantey tulku (ninth reincarnation to bear the name). Overnight stop at Gantey in the vicinity of the monastery.

Day  6/7: Gantey To Jakar (Bumthang) Via Tongsa (6 Hrs)
For the bird enthusiasts an early morning excursion to view the cranes can be arranged. After breakfast, continue journey towards the Pela La Pass crossing the Black Mountains which divide western and central Bhutan, takes about 4-5 hours, magnolias  and rhododendron among grazing yaks are memorable sites along the pass; on clear days the Jumolhari can be seen at 23,685 feet, towards the west. After passing through the domain of yak, sheep and short bamboo brush, past the Nikkarchu bridge is the Tongsa district ; the great white washed stone chorten, built in Nepalese style in the 18th century lies on a bend below the road. The temple was founded by lama called Shida who subdued a demon that  was a menace to the valley.

Tongsa
As you approach Tongsa, you cannot miss viewing the 'never reaching ' Tongsa Dzong in the distance, visible yet elusive before you act ually get near it. Stop  for lunch at the Tongsa Lodge or one of the comfortable wayside inns run by Tibetan residents. Commanding the Mangde river valley at an altitude of 2200 meters ( 7220 feet) Tongsa Dzong is the most impressive Dzong of Bhutan.

It used to be the old gate way between the east and west. The Dzong  built in 1647 by Shabdrung Ngawang Namgyel is a masterpiece in architecture that includes countless courtyards, passageways and corridors, in addition to the 23 temples inside the Dzong. After lunch is a short 2-3 hours drive to  Bumthang. Over night halt at Jakar Lodge.

Bumthang
Different from all the other vallleys in Bhutan is the spacious  and open valley of Bumthang : ranging in altitude from 2600 meters (8530 feet) to 4000 meters (13125), Bumthang is a haven for trekkers and hikers, not mention the numerous beautiful and important Buddhist monasteries and pilgrimage sites, making it the cultural and historic center of Bhutan. One could spend months exploring this fascinating valley. Almost every little valley or a hill has a background of interesting myths and legends about kings , Buddhist masters, and serpents. Bumthang is especially dotted with the religious relics left by  the famous Guru Rinpoche, and his reincarnation the Treasure Finder, TertonPemalinga who is known to have found the scared Ters or Buddhist Texts after diving into a lake ( Mebartsho lake / pool ) with  a lighted lamp on his head among the many sightseeing places are the Jakar Dzong, the Dzong founded by a white bird ; the Jambe and Tamshing Lhakhangs, two of the oldest temples dating to the 7th century in Bhutan ; the Kurje  Lhakhangs, where the kings of Bhutan are taken for their cremation rites ; besides the religious sites do not miss a trip to the famous Bumthang Matha regions ( villages) where you can find rich woolen plaid textiles dyed with natural colours, and the Yatas, a thin woolen cloth with bright patterns often made into warm jackets  and scarves.

Days 9: Wangdiphodrang - Thimphu (3 Hrs Drive)
This last day of your journey can be spent relaxing in your hotel / lodge, or simply touring the vicinity of Thimphu, shopping, meeting your travel agents and friends ; evening you have a choice to travel over to Paro for the night  or stay back in Thimphu. 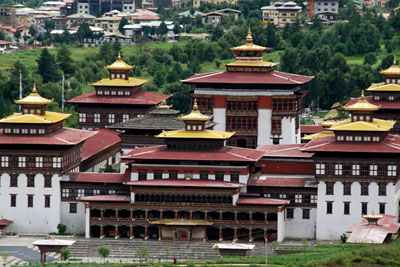 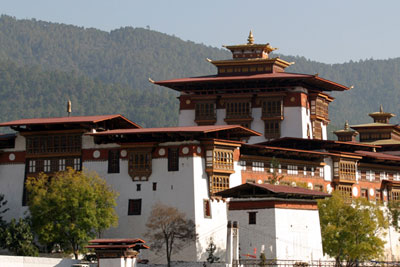 The Gateway to Shangri-La
8 Days 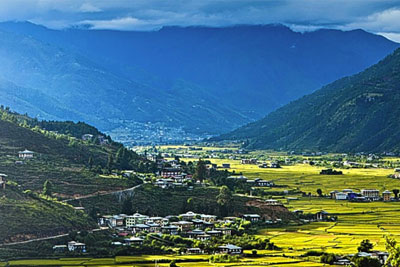 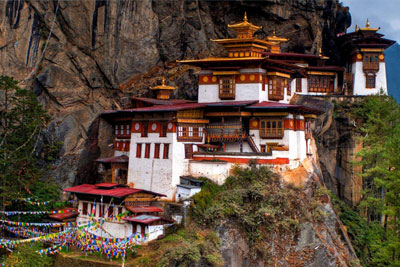 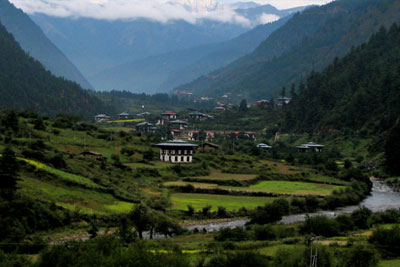 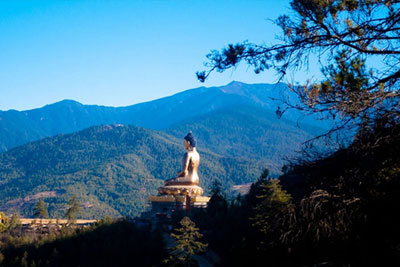 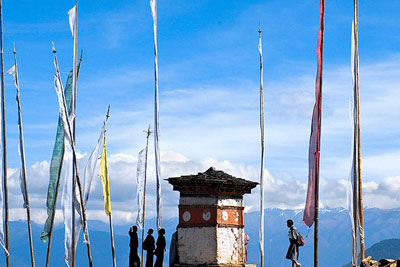 Journey to the land of Dragon
7 Days 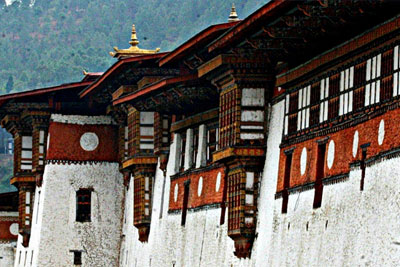 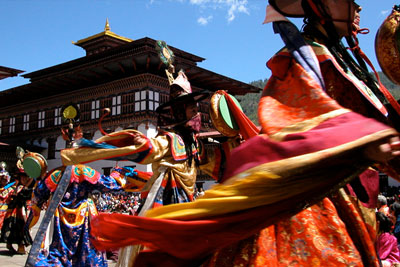